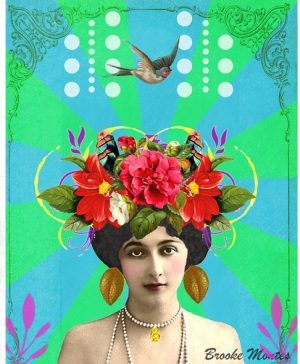 A full moon during an eclipse has the energetic force of three full moons in one. It’s as if you could cleanse and rid yourself of in one month, that you would otherwise do in three.  That is the role of this full moon eclipse in Aquarius happening on February 27th.  I have said this in other posts (in regards to any other major astrological event), and will repeat myself in this one, do not expect for anything major to happen on July 27th because chances are it won’t.  A lot of people tend to look for external events, major external events to manifest, and when they don’t, they say astrology and energy is all BS. The energy and manifestations of an event, particularly of this magnitude, are felt as early as two weeks prior to the event, and still strongly two weeks after the actual event.  In being a lunar event, a lot of this will have to do with an internal and emotional process; a major shift will happen for a lot of people internally.  Chances are that you have already been thinking about some sort of change for a few weeks now and that is where the energy can take you.  When this happens, people tend to ignore what they feel because, as a society, we are extremely focused on our outer reality and manifestations;  forgetting that true change comes within.

This full moon ends the 6-month lunar cycle, which started with the new moon in Aquarius on February 15, 2018.  Still this completion period will last till February 2019. In other words, whatever is meant to end with the Leo-Aquarius eclipses will be better seen in February 2019.  This is what I love about astrology: it forces us to have patience and pay attention to the process that is life.  I have suffered from what I call the “Chasing Bliss” illness for most of my life. I was able to fully self-diagnose this all-consuming, plaguing illness after a lot of self-work. What this is, is a constant need to chase that which is seemingly better than the present moment. The position at work, the salary, the city to live in, the body – chasing bliss wherever I could because that when I finally caught up to it, then I would be completely happy. Well, through a life changing spiritual experience, I realized that I have always been where I needed to be. And in accepting this Truth, I realized that I have always been good enough and have never, ever, needed to chase anything to make me “better.”  In accepting the present moment as the most beautiful and significant moment of your life, you give yourself the gift of simply Being. Being present and accepting life in that moment as the gift that it is.  This is why astrology gifts us with cycles and doesn’t abide by manmade time that was created for order and control.  We have been fooled into thinking that we have control over everything, when in reality we don’t control of anything. And when we think we do, we are the ones being controlled by exterior circumstance whether we like to admit it or not.

This full moon eclipse is joined by Mars and Mercury retrograde.  Aquarius wants to break us from the old in order to move forward, but Mars and Mercury retrograde want to keep us in the old (the old way of living, thinking, behaving, believing, feeling, etc.).  So, while we can see the old being left behind, we are afraid to move forward with what is inevitable to see.  Luckily, Uranus (ruler of Aquarius) in Taurus comes to shake things up, whether we like it or not.  And here is where this lack of control is really seen.  Uranus’ role is to move you from a place you’ve said you’ve wanted to move from, but never had the courage to. Whatever your reasons may have been, Uranus isn’t concerned. You will be directed one step closer to your path.  Especially because, as I mentioned earlier, this eclipse has the energetic force of 3 full moons! What is meant to end, will definitely end. Perhaps not immediately, but everything will make more sense come February 2019.  You see, even endings take time to digest. We have been trained to be cerebral creatures, therefore, we need a mourning period from who we were, to whom we are evolving to be. But that recognition and understanding only come in time; and that time is found solely in the present moment. As cerebral as we claim to be as a society, there is so much intuition and spiritual power within us that can open up a lot for us, we just have to be willing to go there. So, when we don’t willingly go there, the Universe takes us there, it shakes us, so that we look within and discover our true power.

Try to release with this full moon. I suggest writing down all that you wish to let go of and then burn the piece of paper as a form of a new beginning (please be safe). And if you’re not sure of what to release (or are in denial of such) write a petition and use it as a mantra for the next 7 days in order to gain some clarity. Your mantra can be: “I open myself to see things in a different light.” In doing this you become open to become clear about your path, while releasing the need to control the outcome of that path. Be mindful, present, consistent and intentional with your rituals. This is the only way to get more connected with yourself and your inner guidance.