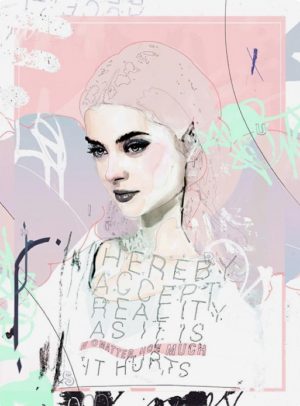 Do you ever stop to ask yourself, “who am I in this life I have created?”  This is a question that I have posed in other articles/posts (and will continue to) because I consider it one of my main missions to spark something within you that makes you ask yourself exactly that.  And once you’ve asked it, for you to realize that the answer doesn’t come easily. Sometimes, it’s a lifelong endeavor that simply becomes easier to ponder over time because we come to the understanding that we are always changing.  Thankfully, we have the stars to guide us to, and through, moments of reflection.  This week is one in which the cosmos begin to slow down in order for us to find the inner power and discipline to focus on what truly matters; and letting go, without much contemplation, of that which no longer serves us.

One of last week’s major events, which plays a huge role in overall energy for the next 5 months, is that of Saturn in Capricorn going retrograde. On April 17th Saturn at 9° Capricorn began its 5-month retrograde period until September 6th to 2° Capricorn.  Saturn in Capricorn is the epitome of hard-work and discipline in order to build a solid foundation and leave a long-lasting legacy behind.  But, too often, both Saturn and Capricorn are only acknowledged for physical manifestations. In doing so, it is completely neglected that the energy of Saturn and Capricorn can be spiritual as well.  The symbol of Capricorn itself tells us a lot about Capricornian and Saturnian (since Saturn rules Capricorn) energy.  Capricorn is symbolized by the mythological sea-goat.  The upper half of the creature is a goat, while the bottom half is a fish tail.  As the goat, Capricorn is determined to climb to the top of the steepest mountain, however difficult and time consuming that may be.  As the fish, the depth, sensitivity and intuition of a Capricorn runs deeply, like water (almost Piscean in nature); therefore, any spiritual or internal transformation is not easily seen by the outside world.  With such a complex makeup, far from just achieving honor and authority among society, a more consciously elevated Saturn in Capricorn will want to leave a legacy behind not just for the sake of being remembered, but for the greater good.  There is purity in such an act.  Purity that can only come from an authentic place within. But authenticity comes from intentionally and consistently asking, “who I in this life I have created?”

This is a mature and spiritual approach to life because you are not setting yourself up to be a victim of circumstance.  Liz Greene states it as, “the concept of self-determination…places the responsibility of earth plane circumstances in the hands of the self.” So, if for some reason the outcome of all your hard work isn’t what you initially intended it to be, for instance, you’ll know that you did all you could, within your power and control, and that’s be good enough.  Such certainty and clarity don’t constitute the knowing of any outcome. In fact, this type of certainty and clarity implies detachment from any answer, yet results in the solid foundation of self-determination that Liz Greene talks about.

You don’t have to be a Capricorn to feel or process this energy.  We all feel it and are working with it, consciously or not.  The point is that whatever you are looking to achieve (especially since we had the new moon in Aries), be sure that it is coming from of place that is true to you. One which truly makes you happy and feel at peace with where you are.  On a more practical level, Saturn retrograde in Capricorn gives us 5 months to refine our skills and knowledge about that which we wish to see come to fruition.

To further the depth of the internal process this week, Pluto in Capricorn also goes retrograde on April 22nd at 21° Capricorn, only to go direct on September 30th at 18° Capricorn. It’s important to note that both Saturn and Pluto retrograde and go direct only days apart. This means that a previously established foundation is being demolished in order for a new one to be built. But this has to come from within –  change always does.

Pluto in Capricorn, in a nutshell, is the negative outcome wrongfully acquired power and control.  This can play out in business and government, for instance, or in personal relationships as well.   Pluto retrograde in Capricorn turns the magnifying glass inward and shows us how the internal process of how the life we created was created.  Now, this doesn’t necessarily mean that the life you are currently living is one that was acquired through deceit and manipulation (it can but doesn’t have to). Pluto in Capricorn in this sense will, again, turn the energy inward to ask yourself if what you’ve manifested genuinely resonates with who you are now, at this moment. It’s important to understand that Saturnian and Plutonic energies are similar in that they’re not wishy-washy. Something either is or it isn’t. And while at times it can create a very binary way of looking at life, with no room for a gray area whatsoever, it also makes things very clear and simple.  And simplicity is one of the greater qualities of Capricorn.  Simplicity allows us to see things exactly for what they are; resulting in only giving attention to that which is important.  Lets take dating, for example.  In a less-developed level of consciousness we may date someone that isn’t good for us. They can be inconsistent, selfish, even disrespectful at times.  In our immaturity we allow this to happen by making excuses for the other person as to why they behave the way they do and why we’re ok with it. As our level of consciousness elevates, so does our self-respect, dignity and strength to create healthy boundaries.  We become more assertive in the decision to value ourselves because we look at things exactly for what they are. Simple and clear. That is Saturn and Pluto in Capricorn.

The full moon in Scorpio further guides us to look within and pay attention to the intensity of our internal process because that is our gps towards authenticity.  This full moon ends the six-month manifestation process that started November 2017 with the new moon in Scorpio.  Now, six months later, you can see what has come from the intentions set back then.  With planets retrograding simultaneously with this full moon, we can re-evaluate the depth and value of our intentions. Do they truly resonate with who we are? Or has that changed in the last six months? Chances are that with all of the cosmic events we’ve had since January, the meaning of a lot in your life has changed, and that’s ok.  Just don’t forget to ask yourself, “who am I in this life I have created?”

The intensity of all of this Capricorn and Scorpio energy combined is going to make it very clear to you what is important and what isn’t in the process of your evolution.  In Saturnian fashion, you will be held absolutely responsible for what you choose that to be. But, don’t worry, this doesn’t all happen overnight, over a week or a month. There is time. But like I mentioned before, intentional and consistent internal observation has to occur so that authenticity can manifest in the long run.

As always, let me know how this resonates with you or if you have any questions. Don’t forget to follow me on Instagram and Facebook, where I discuss more of this energy on a daily basis.