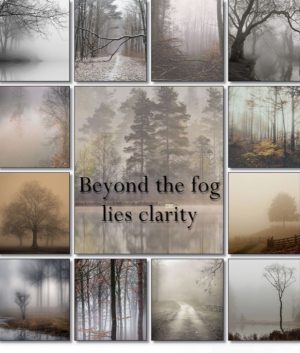 We are in the week following the New Moon Solar eclipse of February 15th and a lot of feelings, thoughts and sensations begin to settle down. Settled energy brings about clarity, and we can begin to act upon that which we set intentions for. But, clarity doesn’t come so quickly – and that’s ok. More often than not, people think that it is on the day of major events in which things come to light and answers are revealed, which can be the case, sometimes. But, since individual cosmic events are part of a larger process, certain things take time to reveal themselves. Especially, those things that need to be revealed to us from within us. Never mind the answers and approvals we need from someone else. What answers and approvals do we need from ourselves to move forward with those intentions we set with the New Moon? How will we go beyond just dreaming and wishing, to actually doing our part to make those dreams come true, while not forcing anything to happen? That fine balance between doing and not doing anything at all is what this week is mostly about.

I want to take a moment to clarify using the term ‘dream.’ When that term is used it’s usually associated with things that are socially accepted as being larger than life. Such as accomplishing the American dream, getting the promotion or having the car – just to name a few very superficial examples. To me, a dream can mean anything you wish to see in your outer reality that is predominantly in your head. Perhaps you dream of a better relationship with a loved one, a better connection with yourself or just a different outlook on life. Those can be dreams too because they go beyond something that is a reality for you at the moment. A lot of people get caught up on the tip of the iceberg (our outer world), per se, and forget that what is beneath the iceberg is just as important, if not more. My point is that sometimes people set their dreams aside because in our culture they’re not considered real dreams. They seem worthless because they are not always obvious to the rest of the world. It’s like going somewhere and not sharing it on social media. If you didn’t share your adventure on social media, does that mean that it wasn’t great? Of course not. It just means that you chose to keep it to yourself because it’s special to you – and that’s what matters. But having the certainty that it matters to your and that’s good enough, takes a little longer for some to accept and embrace. But, with intention and time, we can all create certainty even when we don’t know the outcome.

All this talk about dreams is due to the fact that Pisces energy is being activated this week, especially Neptune in Pisces.

Neptune in Pisces, in a spiritual/metaphysical level, is the dissolving of all ego to see each other as Beings. Not human beings with titles, such as the lawyer, the nurse, or the artist even (even though an artist can be associated with Pisces) – it is seeing one another beyond anything, with the understanding that we are all one and not separate. Too much? Perhaps. That’s because most of us are not ready to understand Neptune in Pisces in that light. It takes time, effort and the right space to begin to do the work to even begin to understand the magnitude of Neptune in Pisces in such a way. But, with our level of consciousness, we can tap into the Neptune in Pisces through creativity, for instance. Those moments in which you find yourself lost in a process of creation and inspiration. Or when you’re meditating and it feels as if you’re in a momentary trance that once you’re back to “reality,” you ask yourself, “What just happened?” That’s a very light way of tapping into Neptune in Pisces energy. And in the reality that we live in now, with the body that our Being embodies, we do want to go beyond the just dreaming, to seeing the things we desire to come to fruition.

So, we do, and we do, and do some more because the way to get whatever we want is to hustle for it, right? The term hustle has cultivated a culture of people being so busy being busy that they don’t stop to question the intention behind their intentions. The famous cliché of the glorification of being busy is true because we glorify doing without stopping or contemplating. All of that energy is drenched with ego, which is the complete opposite of Pisces energy. Pisces energy is known as the energy of “let go and let God.” Let go of expectations of how it should turn out and let God (the Light, the Universe, or whatever you feel more comfortable with) show you the way. Now, this entire concept for me has been very difficult to implement in my own life because I simply want to make things happen when I want the way I want them. A lot of that has changed for me, and this week’s energy is an example as to how there can exist a balance between doing and not doing.

Neptune in Pisces, the dream, contacts Saturn and Pluto in Capricorn. Saturn in Capricorn wants you to accomplish that dream, but Pluto in Capricorn wants you to transform something within you before moving onto that next stage of your dream. This way a brand new foundation with a different level of consciousness, Saturn in Capricorn, can be built for the long run. Don’t carry the old into the new – that’s exactly what Pisces energy is. As the last sign of the zodiac, Pisces wants you to dissolve a lot of BS and leave it behind before starting again, and that’s a good thing. You can’t start a new relationship with the same habits of an old one. I mean, you can, but you’ll probably end up with the same result, which is most likely not the best result. Pisces is about endings and allowing those ending to occur without resistance, aka ego. As a water sign, Pisces washes away and flows, the same way we need to flow with whatever must go.

Capricorn energy helps us be disciplined in our daily doings towards our dreams, it helps us get clear and it even helps us create a plan. But trying to control the outcome of that dream we set intentions for, is getting in our own way. Pisces energy inspires us, but it also reminds us to let go of how and when the outcome will come. That’s not up to us. All we can do is prepare and in preparing we are sending out an energy that we are certain that our dreams will come to pass. But for now, we trust the process we’re in and the lessons we learn along the way.  The kind of reasoning can be annoying to people especially in the very “matter-of-fact” world we live in.  All of this stuff starts to sound like BS itself and we shutdown to the vastness it entails.  But, look at it this way: how many times in the past has something been delayed for you, which initially upset you, but then you realized it was probably for the best? Perhaps you didn’t get that  job because you were meant to get a better one. Or you didn’t end up with one person, because someone else was better suited for you. That’s the kind of energy this is. Let things happen.

Clarity will come, but even clarity has a process to go through before illuminating you.